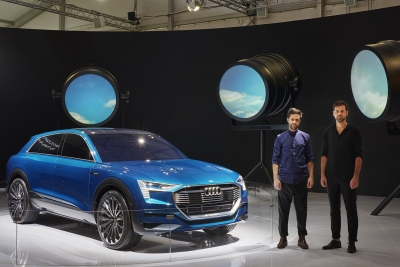 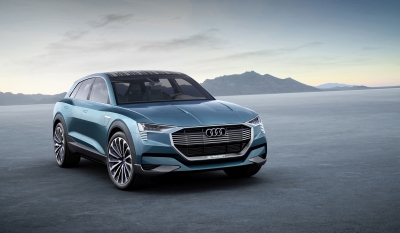 The sporty SUV provides an outlook on the brand’s first large-series electric vehicle and proves to be pioneering in its segment at the very first glance. It follows the Audi “Aerosthetics” concept, combining technical measures for reducing aerodynamic drag with creative design solutions.

The Audi e-tron quattro concept serves as the inspiration for a monumental installation by Humans since 1982.

Born in 1982, Per Emanuelsson (Sweden) and Bastian Bischoff (Germany) founded their studio in 2009. Their client list contains the world’s most influential art collectors, international museums and global corporations, and their work has been shown at museums, galleries and auctions in London, New York, Paris, Tokyo, Beijing, Shanghai, New Delhi, Seoul, Miami, Milan, Brussels, Stockholm, and Basel.

“Fascinating ideas seem to like not being detected. That's why they are fascinating. And they seem to hide on the edges of man-made realms. Find those ideas by mixing physics with fashion, art with medicine, technology with philosophy, cosmetics with
astronautics, food with architecture, religion with humor...”